MERLIN CLUB: VALIANT
Or The (First) One With the Daddy Issues

RECAP – Valiant, a knight, buys an enchanted shield from a sorcerer. The shield has three snakes painted on it, which come to life under Valiant’s commant. Apparently, these snakes are poisonous because Valiant uses them to kill the sorcerer then moves on to Camelot to compete in the annual tournament.

We then see Arthur working on his sword-fighting skills with Merlin, aka beating the crap out of his manservant. Later with Gaius, a sore and weary Merlin uses magic to make a scroll come to him. Gaius slaps him upside the head and warns him not be caught using magic. Merlin bitches about Arthur and all the work being his manservant entails. Gaius says that Arthur is under a lot of pressure as the future king.

The following day, Uther begins the tournament then tells Arthur that he expects his son will make him proud. Both Arthur and Valiant do well, defeating their opponents. Merlin uses magic later that night to do the long list of chores Arthur has given him while studying his book of magic.

The competing knights greet Uther and Morgana, and there’s flirting between Valiant and Morgana. Arthur isn’t happy about that, and of course, Morgana doesn’t hesitate to taunt him.

In the armory the next morning, Merlin hears hissing and looks at Valiant’s shield. He sees one of the snakes blinking, but before he can do anything, Valiant is there. Merlin manages to leave in one piece. Later, Valiant faces Ewan in the tournament and summons the snakes. Valiant wins and Ewan is taken to Gaius’ chambers. The physician discovers the snake bite and Merlin figures out what has happened. He runs to Valiant’s rooms and watches the knight feed mice to the snakes on the shield. When he tells Gaius what he has seen, the older man warns Merlin not to accuse Valiant without any proof. That Uther is not going to take the word of a servant over that of a knight.

The tournament continues and the final match is between….*drum roll*

Gaius tells Merlin he was right, that they have to Valiant. If they can make an antidote for Ewan, the knight can tell the king what has happened. While Valiant and the other knights are dining with the king, Merlin goes to Valiant’s chambers. When one of the snakes animates and tries to strike, Merlin cuts its head off. He delivers the head to Gaius, who begins to make the antidote. Merlin then takes the head to Arthur.

Arthur asks for Merlin’s word that what he is telling him is the truth and Arthur believes him and calls for an audience with the king and court. Gaius gives Ewan the antidote and the knight wakes up, but when Gaius leaves to collect some herbs, Ewan is attacked by another of the snakes and dies.

Before the court, Arthur accuses Valiant of using magic. Uther examines the shield but finds nothing. When Gaius comes and tells them Ewan is dead, Arthur is forced to withdraw his accusation and apologize. During all this Uther is quite the prick. Sorry, but he is. Arthur is humiliated and ends up firing Merlin, saying he needs a servant he can trust.

Merlin visits the dragon, who says Merlins destiny lies with Arthur. A bit later, Gwen encourages Merlin to keep trying to expose the truth. Merlin searches the magic book for a spell to bring inanimate objects to life and tries the spell on a statue of a dog. He also tries to convince Arthur not to fight in the tournament, that Valiant will use the shield against him. Arthur says he knows, but he cannot withdraw because it would make him a coward, and who would follow a coward into battle.

Merlin spends the night trying to make the statue come to life, managing to do so by morning. Valiant and Arthur face each other. Merlin watches and says the spell, bringing the snakes to life and exposing Valiant.

Arthur, now unarmed, faces the snakes which Valiant has ordered to kill the prince. Morgana thows a sword to Arthur who kills the snakes and Valiant.

At the feast celebrating Arthur as the tournament’s champion, Morgana teases Arthur about being saved by a woman, which Arthur promptly scoffs at. He then goes and complains to Merlin about it. He admits that he was wrong and rehires Merlin as his manservant.

If I’d written this episode, I would have changed… I don’t think there’s there’s anything I would change really. At least I can’t think of anything right now. LOL

The thing I loved and/or hated about this episode – I really like how this episode delves into the character of Arthur. We see a lot about him. Turns out there’s some depth to our favorite Prince Prat. Clearly, he’s under a lot of pressure from his father. And while it’s clear he wants to please his father and earn his approval, it’s clear that Arthur is so different from Uther. When Merlin tells Arthur about Valiant and says that he knows he’s just a servant and his word means nothing, the look on Arthur’s face speaks volumes. He doesn’t share Uther’s view in that area, that much is clear. Even after it goes horribly wrong, the fact that Arthur fires Merlin doesn’t change my opinion that son is nothing like father. Arthur trusted Merlin and stood up to Uther, which doesn’t seem like something he’s done a lot of. He’s humiliated in the face of his father’s disappointment and when his honor and courage are questioned. He reacts poorly and pushes away the person he feels responsible – Merlin. BUT, in the end, he admits to Merlin that he was wrong. Can you see Uther doing that? No, me neither.

Thing I hated? Uther being such a prick. Especially when Arthur accuses Valiant. Uther acts like such an ass. He assumes what Valiant claims to be true – that Arthur is making these accusations because he is afraid to face Valiant. It was hard to watch the father-son dynamic in this one, to be honest. But I think it did add dimension to Arthur’s character so I guess it was worth it.

Something I never noticed about this episode before – Gwen is wearing the same dress as she did in the first episode. Both episodes span several days; in this episode, we know for sure the tournament lasts three days.

Now, I know she is a servant. As is Merlin who doesn’t have much variety in his wardrobe either. However, later on, she has a variety of dresses. I’ve admired them. Now, I’m going to be watching carefully to see when she wears something different. Thus begins The Great Gwen Wardrobe Watch

Favorite costume – I could easily point out one of the women’s dresses each episode, but I’ll attempt to mix it up. I really dig Arthur’s leather riding coat. Don’t know why, but I do… 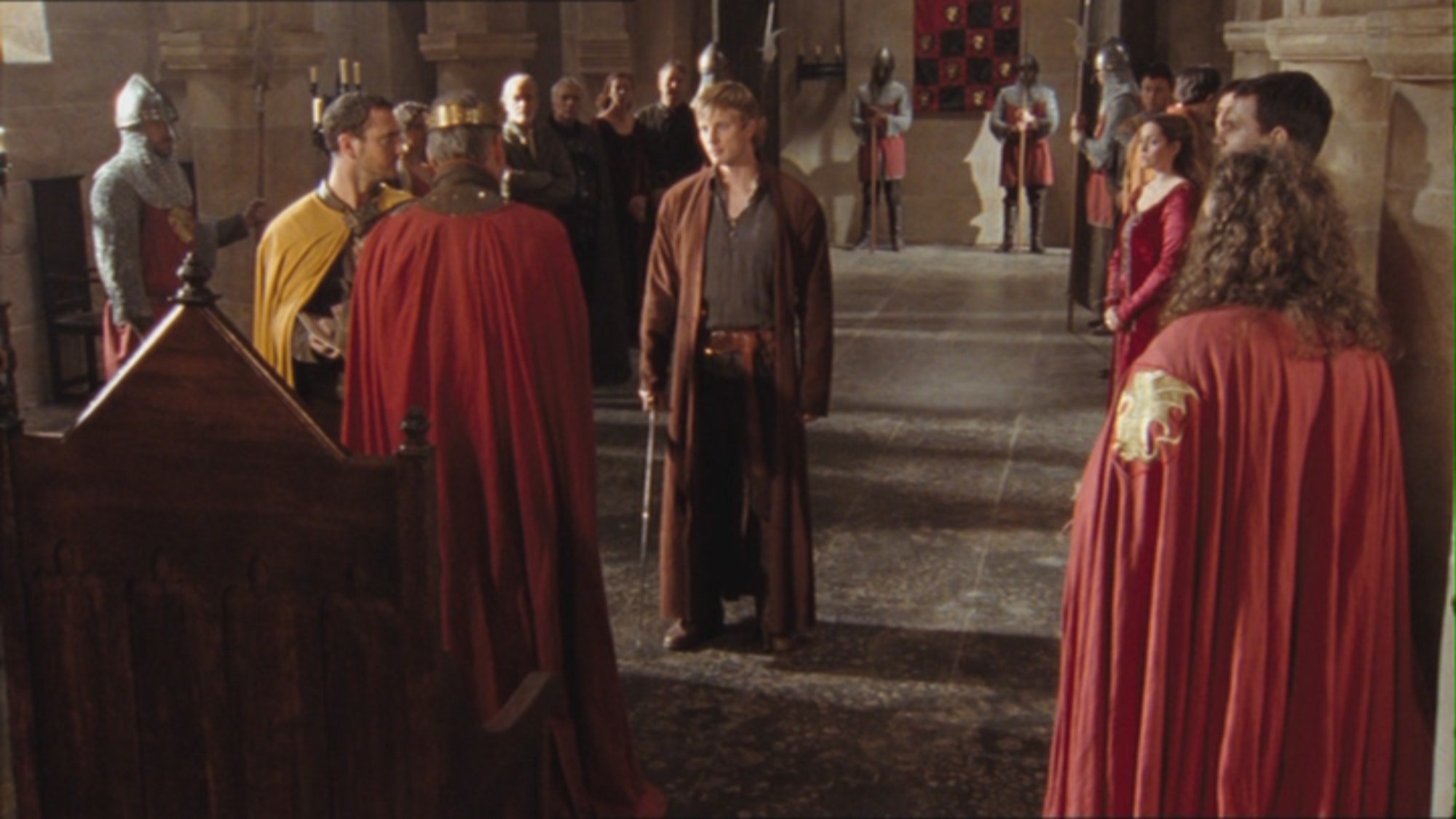 Here is proof of some random head canon I’ve created – Again, this was the tough question for me. I think Merlin and Arthur “recognized” each other. They are drawn together – two halves of the whole. I think this episode shows that. How Arthur is with Merlin… He’s not like that with anyone else. He believes him, trusts him after such a short amount of time together. Even when he was angry and sacks Merlin, later, when Merlin goes to him later, Arthur admits that he still believes what Merlin said is true. And at the feast he admits he was wrong, basically apologizing to Merlin. I can’t imagine Arthur is someone who’s apologized much in his life. Yet he does to Merlin, a servant he has known for a short time. Because deep down, he recognizes his other half. (And that can be taken in a platonic way or in a way that includes romantic and sexy feelings too. I don’t think you have to think hard to figure which side I’m on. 🙂 )

What would Bronwyn steal from Camelot in this episode? This.

Don’t really know what it is exactly, but I saw it and immediately thought, if Bron had a fireplace, that thing would be over it.

What made Jen lose her shit (in a good or bad way) in this episode? I think a couple of things (maybe more… LOL) First, Valiant’s shield. How the heck did no on see the snakes come to life?

Granted, the actual shield blocked it from view from the majority of the spectators (including the king’s box), but there were people all around, and no one saw those big ass snakes? All right, then. :-/

Second, that the knight, Ewan, who was bitten being left alone.

Especially right as Valiant was being confronted about using magic. What was Gaius thinking… Those herbs he needed to collect couldn’t have been THAT important. Is it any shock that the man was killed?

Until the next episode – The Mark of Nimueh! (Which we’ll be watching Monday 2/3, at 8pm EST. We’ll be on Twitter with the hashtag #MerlinClub)