MERLIN CLUB: LOVE IN THE TIME OF DRAGONS
Or the One Where Gaius is Dumb in Love

So I’m writing this early and when it posts, I’ll still be on vacation in England.

In fact, today (Friday), I’ll be touring Avebury and Glastonbury (I’m getting my Arthurian geek on, people!) and visiting the Chalice Well & Gardens.

Basically, I’m getting my post all ready to go amidst packing and planning and generally freaking out that this trip is finally here. 🙂

So the basic gist of this episode – People in Camelot are being miraculously healed, Uther suspects sorcery (*jazz hands* SURPRISE) and sends Gaius to investigate. Turns out the mysterious healer is Alice, an old flame of Gaius’ who fled during the Great Purge. Gaius is so happy to see her and be with her that he doesn’t see the signs that something is not right. Alice is being controlled by a magical creature, the manticore. Ugly ass thing.

And the goal of this creature is…you guessed it…to kill Uther. We wouldn’t weep about that, but they’re going to basically frame Gaius for it. Not cool. But never fear, my lovlies, because creeper!Merlin is on the case.

Uther is poisoned, and Alice is arrested (because Merlin told Arthur it was her to protect Gaius). Merlin kills the manicore which causes the effects of its is poison to fade. Recovering Uther sentences Alice to death even after he’s told that she wasn’t in control of her actions… This doesn’t surprise any of us, does it? But somehow, Alice escapes the dungeons before her sentence is carried out. Gaius obviously helped her but seriously a child could break out of that place on its own. Security is not high there, folks.

If I’d written this episode, I would have changed…This isn’t one of my favorite episodes, I’ll admit. *shrug* One thing I’d have changed? For the love of everything holy and pure, could we not have the manticove making orgasm faces and noises while Alice is “milking” the venom from it’s stinger thing? Just ew. Gross and unnecessary, people. If someone had run that by me beforehand, wanting me to put that in…

Thing(s) I loved about this episode—It was nice to see a bit of back story for Gaius, I guess. Really see what he lost because of his choices during Uther’s reign and the Great Purge.

That Arthur knows something is bothering Merlin and tries, in his special way, to make Merlin feel better.

Merlin in this episode… Yeah, yeah, I know that I love him in every episode. But this one… He saw something was wrong and it was up to him completely, with no help from him mentor at all, to do something about it. To research and figure out what was going on and to try to stop it. He made the difficult choice, putting Camelot before his relationship with Gaius, and told Arthur is was Alice who poisoned the king. I think it shows great strength in his character. 🙂

Thing(s) I hated about this episode—As usual, Uther’s unwavering hatred of magic. But that isn’t going to change is it?

And I know Gaius is in luuuurve and is just beside himself that he has a second change with Alice, but damn, it made him ignore Merlin’s concerns and all that even more than usual, and I hate that.

I also hate that we didn’t really see Morgana and Gwen in this episode at all.

Something I never noticed about this episode before—I was really thinking about this one as I watched. Don’t know if it’s something I didn’t notice or if it’s just something I didn’t think about first time around… If Alice wasn’t revealed (thank you, Merlin), would Gaius have let his king die and taken the blame for it? Because when Merlin says, “It was her or you, Gaius”, the physician responds, “It wasn’t your choice to make!” That leads me to believe he would have just let things happen as they were. It was Alice’s arrest that spurred him into action to help Merlin destroy the manticore. He wouldn’t have been able to do so from the dungeons and Uther could have died as a result. So…for all his loyalty to his king, and all the choices he made because of that, he was willing to let Uther die to save Alice. I think…

Proof of some head canon I’ve created—Got nothing here this week.

Favorite costume—I really liked Alice’s dress, the embroidery was lovely. And her shawl. (see pic for next question  🙂 )

What would Bron steal from Camelot in this episode? The box the maticore used as portal. Sans manticore, of course. 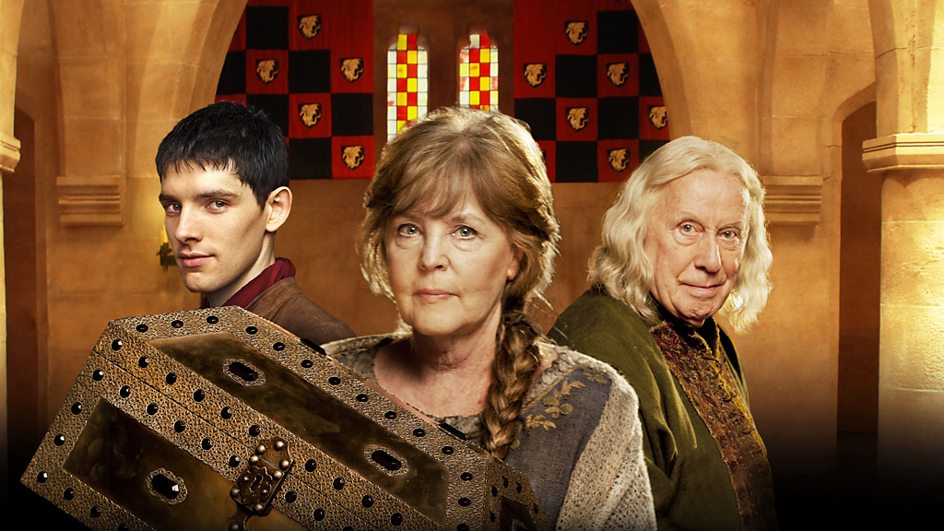 What made Jen lose her shit (in a good or bad way) in this episode? I would think how much stupider Gaius is when he’s in love.

(Since I’m doing this ahead of time, I’m simply linking to Jen and Bron’s blogs. I’ll get on as soon as I can and put direct links to their posts. 🙂 )